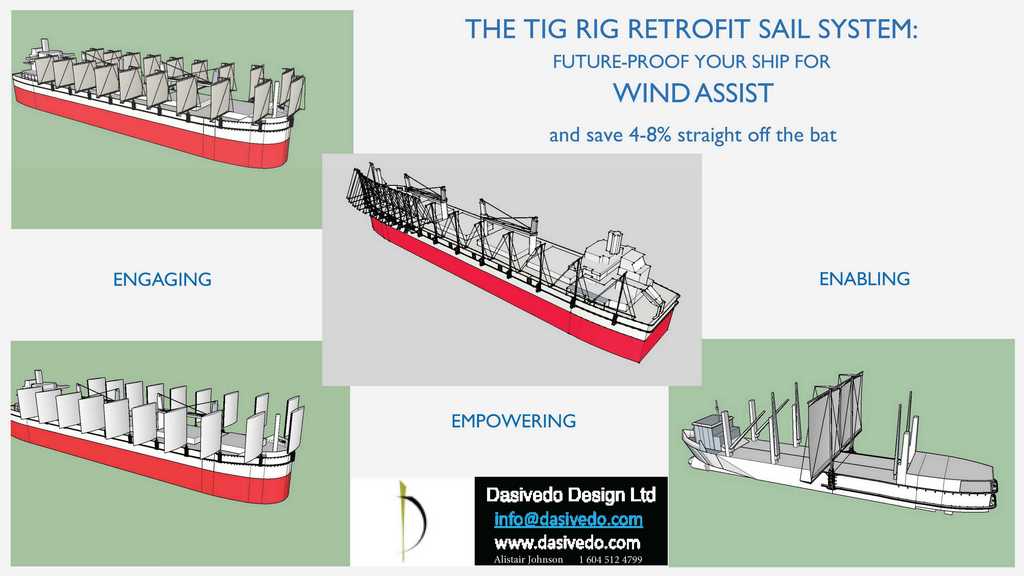 The Tig Rig (TR) sail system is a way to retrofit sails to the world’s existing flat decked merchant ships, tankers and bulk carriers and some ferries.  The TR is a two part system consisting of square rigged sails in self contained units which are mounted at fixed mounting points around the hull of the ship.

The mast and sails can be rotated through 360o and the sails reefed up and down in increments of 10ths of sail drop.  The mounting points are interconnected by rails which allow the units to be drawn round the ship to sea side and out of the way of dockside operations in port.  A similar but more involved procedure allows the units to be gathered at the stern and bow for transit through canals.

The TR sail is a roller blind design of sail typically measuring 16m wide x 15m high.  Both the reefing and the angle of the mast can be controlled through control cables, cogs and worm screws in three ways:

However overriding all these controls the TR units have automatic mechanical safety devices for automated reefing and automated mast release.  These mechanical safety overrides prevent damage to ship, mast or sail through excessive wind however sudden.

The interconnecting rail system consists of two parallel rails. The top rail is flush with the deck edge and the bottom rail protrudes at most 250m (9”) from hullside and so is easily fendered/yokohama’d.  The method for clearing the sail units to one side in port is very common sense, low tech and easy for the crew to learn.  Dockside clearance on a 200m long ship with 9 units each side and one bow unit should take two crew members about half an hour.

For getting through canals and clearing the units to stern and bow the procedure is more involved.  The sails have to be reefed down and the two booms and sail have to be removed from the mast.  This allows the cleared units to be gathered closely enough to fit at each end of the ship.

The raw data from Kiel was then used to produce routing analysis by Rogier Eggers of Marin, the Dutch National Maritime Institute.  For N Atlantic and N Pacific routes in both directions for the ship travelling at 12 knots the thrust savings averaged 8%.  The thrust savings rise by 3% for every knot decrease in sailing speed.

The MEPC 62/INF.34 results, the internationally agreed global wind probability that should be used for assessing wind assisted devices for EEDI savings showed savings of 4% at 12 knots rising by 1.5% for every knot decrease in ship speed.

To address the problem of getting thrust with wind from directly astern we have devised a Chevron formation which works well.  This means that there is no need to steer the ship off the stern wind to get thrust and so does not interfere with the captain’s course choices.

There is a proposed solution to the issue of SOLAS regulated visibility from the bridge.  Cameras mounted on top of several masts will have a viewing horizon between bridge and radar diameter.  Once radar or cameras detect an approaching object/vessel the required TR sails can be reefed down to allow the SOLAS compliant line of sight from the bridge to be re established.

The Tig Rig rails sit above the water line and so don’t need dry dock to be installed. The installation of the rail mounting system and the computer control hardware will cost we think between $200,000 to $300,000 depending on the size of the ship and take 7-10 days to complete. In effect the owner is getting the ship set up for similar savings to hull coatings and propeller improvements (3% to 5%) for only $300,000 capital expenditure and minimal downtime.

By separating the sails units from the mounting system the TR gets round the problem of the split incentive in the time charter market.  Because owners do not pay for the fuel they have no incentive to install fuel saving devices.  Because charterers have no long term interest in the ship they have no incentive either.  With TR once the mounting system is installed the operators/charterers will be able to rent the units on a profit share basis and be cash flow positive from day one.

It is suggested that not enough of the world’s fleet will be able to install scrubbers in time to meet the 2020 sulphur emissions regulations.  If this is the case then the ships will have to switch fuel to marine gas oil MGO or marine diesel oil MDO.  Even in the current market these cost 1.5 to 2 times the cost of Bunker.  Installing TR’s will help offset this increased fuel cost.

The IMO announced the ambitious plan for shipping emissions reductions of at least 50% by 2050 in their communique of 13th April 2018. www.imo.org/en/MediaCentre/PressBriefings/Pages/06GHGinitialstrategy.aspx

This is a bit like President Kennedy’s determination to land on the moon by 1970.  This will focus the industry the technologies and business plans needed to achieve this goal and puts TR and Dasivedo in a very good position to benefit.

The rental method will require my investors to have deep pockets but based on half of 1% market take up (200 ships and 1,600 units) per year and high rental renewal the business breaks even in Y4 and you have $150m in the bank at the end of Y6.  This does not include the tax write off on the capital depreciation of the units.

There are many different designs for wind assisted shipping devices, about 10 that can be called serious.  At the moment all except Tig Rig, Flettner Rotors and Skysails have to be installed on new build ships.  It is hard to say which of the 10 overall designs will turn out to be winners but it can be said that it will be very hard for any of them to be taken up by the shipping industry unless they can be shown to work on existing ships.  There will be a need for a retrofit procedure to prove the technology.  The TR system can be adapted to house several of the other wind assist designs quite simply.

At the moment Flettner Rotors and Skysails have to be fitted directly to existing ships in their own unique ways.  Only TR rail mountings can offer mounting to other designs.  With this in mind we have approached other designers and offered them the opportunity to become investors in the rail mounting system.  This offers them the opportunity to be shareholders in what could become the industry standard retrofit mounting system in this introductory period and what may become part of wind assist installations into the future.  Taking up this offer would offer those designer/investors that do not end up as winners, maybe as many as 7 or 8 of the 10 some long term returns from the mounting system, a way of hedging their bets.

There is no reason technically speaking why the TR should not be fitted alongside Skysails and Flettner Rotors because they occupy different spaces both on the ship and with respect to the wind.

Skysails – The TR can be used in conjunction with the Skysail, their relationship is equivalent to the relationship between mainsail and spinnaker on a dingy.  We found that the Chevron configuration delivered more thrust with the bow sail reefed down.  This told us the Chevron delivered a strong wind flow through the bow.  We feel that this wind flow may assist the launch of the Skysails.

Flettner rotors – The TR Chevron configuration also delivers thrust through ranges of wind that the Flettners can’t – in a range a few degrees either side of dead astern.  Beyond that Flettner dead range the two do not compete but would each deliver their own thrust to give combined thrust through a large range of wind angle.

‘Dasivedo is lucky to be working with a very innovative ship designer who is also based in Vancouver. He has developed truly amazing hull forms offering double digit savings on new build ships. The first of these, a Chilean Ro Ro Ferry is currently being built and he has been commissioned to build a new ship for a Seattle company for whom he has previously designed their 4th ship.  The 5th ship is hoping to carry two TR units.

It may be possible to discuss installing TR units sooner than the new build by retrofitting the system to one of the older ships in the fleet.  These ships are only 2,000-4,000 DWT and so will only take a few TR units.  However the Sail Area to Displacement ratios (SA/D) on these small ships and the Seattle to Alaska/Aleutians routing offer very good savings.  The benefit of having so few units is that they can be manually controlled and so the TR system can be trialled without having to invest in the computer control system. The control system software house are excited by this prospect because it will allow them to set up monitoring during the trials and significantly de risk their writing.

With this low cost and small scale trial complete the TR will have been introduced to the industry and the public and this should make bigger scale trails far easier to finance.

If the initial TR trial works well there is no reason why the same TR mounting can’t be used to trial other designs of wind assist devices.  Using the same ship as the common test bed will be the prettiest baby contest and will go a long way to deciding which of the devices will turn out to be commercially successful.  Getting all the designers to agree to this comparative trial will be very difficult but would be made far easier if they all had a stake in the mounting system.